Contents:
Dog's Best Friend by Jennifer Argle
Mary Magdalene by Red Jordan Arobateau
Art by Andy Baird
If I Am Murdered by Sherilyn Connelly
And It Was Too Good by Jim Dewitt
The way you hold your knife by Tim Donnelly
Photos by Eric/Checkers
Whores Against War by Charlie Huzzle
On Poems by Edward Mycue
Vegas Vacation by Alvin Orloff
Privates by Roger Pinnell
God poem #1 by Andrew Ramer
A Biography of Winning His Way by Irving Rosenthal
Teeth by Matthue Roth
Excerpt from Freddy by Lito Sandoval
mix and match by Julia Serano
Night Crawlers by Lloyd Stensrud
Smiling Cannibal by John Tunui 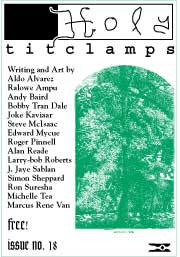 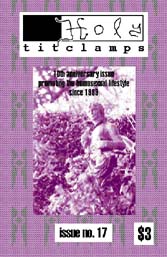 Holy Titclamps is #17 was published in 1999. It's a retrospective issue with new pieces by past contributors. It includes:

To order current issues of Holy Titclamps, send cash (no checks, please) to

For international orders, add $1 U.S. cash to the above prices. (once again, no checks.)

#14: Queer History Issue. Joe Westmoreland on the San Francisco punk scene of the late 70s; "I Was Queer When Gay Meant Happy" by REB; "My Unexceptional Dyke Life" by Spence; "Out of Iowa" by Mountain Lily; "Roy Cohn Revisited" by Larry-bob; "Instruction" by D. Travers Scott; "I was a Twinkie for the Catholic Church" by Mick Dee; Larry-bob on actor Ernest Thesiger; an interview with Glen Schellenbery of Toronto new wave band The Dishes; "Intergenerational Yearning, or, the Dating Game," by John Paul Ricco; "Schmitty," by Tom Scut; Robynski on queer anarchists Nechaev and Bakunin. Art by Andy Baird, Jim Jeske, and Jorge Domingos. $3

1. Take your wallet out of your pocket or purse.

4. Write my address and yours on the envelope.

6. Write your address and which issue you want on the paper

7. Put your money and the paper in the envelope.

9. Put a stamp on the envelope.

10. Put the envelope in a mailbox.

For more information about issues of Holy Titclamps or Queer Zine Explosion, contact Larry-bob at larrybob@gmail.com

Back to main Holy Titclamps page