Pat's cats and their pals 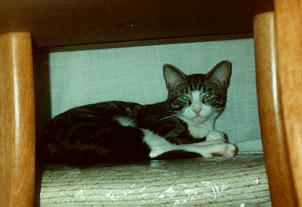 I have probably some of the laziest cats on the face of the planet. My oldest cat is named "Pooh," and he's now about 6-7 years old, and weighs about 15 pounds. While his official name is "Pooh," I sometimes call him "Boo-boo" and my former housemates called "Alcatraz" since he was always looking for a way to get out of the house. I took him in as a stray when he was just a kitty meowing his ass off underneath the hood of a car on the street. With the help of a housemate, I rescued him. He's been hanging out with me ever since. He's a real cool cat.

Here's some early photos of Pooh when he was still a kittycat.

Here's some current shots of Pooh: