Hi, thanks for checking out my DIY (Do-It-Yourself) home loudspeaker page (last updated 11-10-99).

About 10 years ago, I built some loudspeakers for college course credit. I figure if I had to build something for college credit, I might as well build something I'd use, instead of something like a voltmeter. The speakers were based off of Professor W. Marshall Leach's speaker plans. Prof. Leach is an electrical engineering professor at Georgia Institute of Technology, my alma mater.

Just last month I noticed that one of my mid-range drivers had holes in it and it made the speaker sound like ca-ca. From the looks of it, the foam material of the cone has deteriorated. So it was time to replace the mid-range driver. I tried driving by the shop where I originally bought all the drivers and crossover components, but I was met with an Asian gynecology clinic in the same location as that the electronics store was located 10 years ago. Doh! So I did a web search and finally struck paydirt when I searched on "Peerless mid-range driver", where I discovered that the shop I bought my components from had just moved a few miles away from the clinic. The shop's name is Audio Lab of Georgia. You can still get all the drivers and crossover components you need for GT speakers from them (with the exception of the wood for the enclosure and some miscellaneous items that you need from Radio Shack and a hardware store (Ace or Home Depot is your best bet). While I was at their website I noticed that they had links to Prof. Leach's speaker plans, and a link to his home page where you can find plans for the the Leach SuperAmp, 2-way bookshelf speakers, and 3-way satellite speaker system. There some more plans on Prof. Leach's webpage, please check them out if you are so inclined.

The speakers I built were based off of the Georgia Tech Audio Laboratory Loudspeaker System. I took a peek at the latest and greatest plans, compared them to the plans I used 10 years and ago, and quickly determined that Prof. Leach had made some changes to the crossover network. 10 years ago, this was the crossover design I implemented: 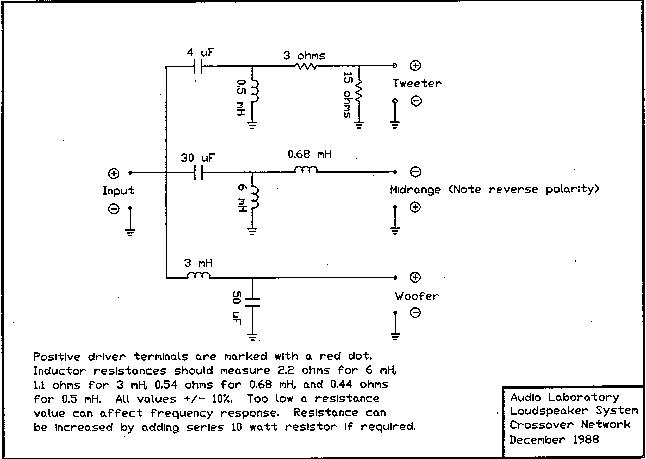 As you can see some tweaking has been done to the tweeter section, and to the mid-range. I've always felt the original crossover network emphasized too much on the high/mid-range, and the new crossover network definitely takes the sting off. The added resistors in the mid-range crossover acts as a current divider and lowers the current that feeds the mid-range driver (while still maintaining an 8 ohm load for the receiver/amp. Note: I used a 100 microFarad capacitor in the woofer network (instead of the 50 microFarad capacitor) to roll off the half power crossover point at 300Hz instead of 400Hz.

This is pretty embarrassing to admit, but when I replaced my torn mid-range driver, I discovered that 10 years ago I had wired the positive and negative terminal backwards according the the crossover design, and through the years, I never could get decent imaging of the lead vocals when I listened to these speakers. Once I wired up that mid-range up correctly, it was like night and day, the audible clarity returned and made for better imaging and music listening. I did check to see if I wired my other speaker incorrectly, but it seems I got that one connection correct. I suppose it was an easy mistake to make, but I do remember that one of my speakers always did sound better than the other one, and it was all due to the mis-wired mid-range which produced some phase cancellation in the sound, and thus the speaker always sounded muffled and indistinct. The closest I can explain it is for you to listen to 2 speakers hooked up out of phase, the sound just becomes dispersed and de-localized.

These are some pictures of my speaker cabinets. I had utilized Wood Wonder's services (details in the speaker plans) to obtain the rosewood plywood cut into the specified pieces that I would need to assemble the speaker cabinets. Building the 1st speaker cabinet is a chore, but once you know what you are doing, the 2nd one goes much quicker and easier. If I get a chance, I may reproduce/scan in my original 2-3 page report on my assembly experience. Without further delay, here are the pictures, just click on the thumbnails for a larger view of the pictures:

Since I was in the midst of upgrading the crossover network, I thought it was be nice to take some pictures of the before, during and after stages of my upgrade. I had to add/replace a total of 5 componenets.

The Before stage: Here is a shot of the original crossover over network inside the speaker cabinet:

The During stage: Here's a picture of the mess once I ripped out the components that needed to be replaced and all the tools I used for the upgrade:

The After stage: Here's a couple of pictures of the newly installed network components. I had to make due with whatever space I could find given the constraints of the wire leads of the new and existing components and having to implement the new crossover network design as depicted:

So when I decided to replace the mid-range driver, I bought the driver, and then next week, I went ahead and bought the components I needed to upgrade the crossover network. The pictures above show the various stages of the upgrade work. Once I soldered everything in place, I hooked the speakers back up to my receiver and determined that I needed another mid-range driver to balance out the 1-2 dB increase in efficiency (perceived by ear only) of the new mid-range driver versus the 10 year old mid-range driver I had in my other loudspeaker. So now that I have installed all the new components and upgraded both mid-range drivers, I am quite pleased with the results (it was worth another $40 to replace that old mid-range for the new one which netted me a more balanced sound between the 2 speakers. Also, these speakers sound less harsh/bright than before. The new design changes in the crossover smoothed out the frequency response for the better.

If you like DIY projects, and have $350 to blow on speakers, these might be a good project for you (if you're handy with a soldering iron, and other wood cutting appliances). Many people use MDF (Medium Density Fiberboard - 3/4" is my recommendation) for building flexy racks to house their home theater components. I would like to see someone use MDF to build a pair of speakers with. If MDF is good enough for NHT to build their speakers with, I don't why it can't be used here with these speaker plans. Using MDF might chop off $25-$50 off the final cost of the pair of speakers. See Prof. Leach's web page for the details on loudspeaker construction (from obtaining the wood, the cutting diagrams, to the crossover component parts suppliers). I can recommend the folks at AudioLab of Georgia very strongly as a supplier of the drivers and the crossover components.

I wish I could give out some "tech" specs on these speakers, but I can only offer that they should easily handle 100W/ch (maybe more since most of the power goes to the woofer, and the mid-range itself is rated at 100W). I will venture that their SPL could be rated around 88-89 dB. If I had some test equipment, I'd try to come up with the rating specs. I recommending using these speakers in tandem with a powered subwoofer to lessen the woofer's load. One day I'll consider staining them some nice wood color, but I'm just not good at choosing a color and then later having painter's remorse on the color choice, so they stay nice and light for now. Please contact me if you have any questions (can't say I'll be able to answer all of them!) and if you do build the speakers, I'd like to see pictures of their construction, and the progress in building them.

Thanks for stopping by! Now go watch some DVDs and listen to some music CDs!