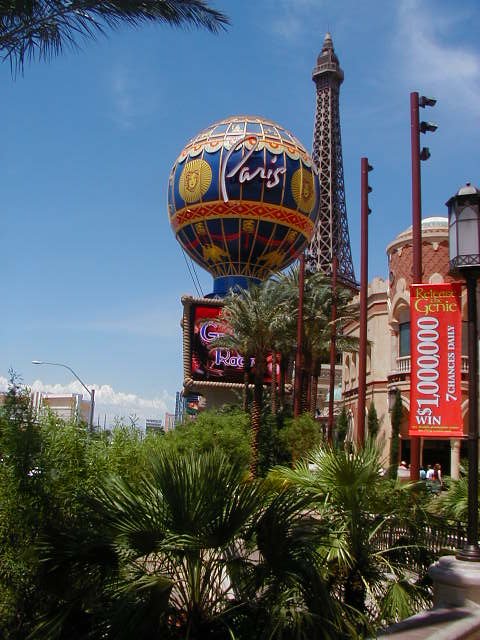 This is a quick-and-dirty photo album of photos I took while I was in Las Vegas around July 4, 2001. There's nothing too exciting about the photos, but the place has definitely changed since I was there in 1997. If you've never been, these photos will give you an idea of what to expect. It was blazing hot that day, and I was sweating up a storm. Be sure to wear comfortable clothe and SHOES. I managed to get a nasty blister on my right foot wearing not-so-broken-in tennis shoes.

If you are interested in Las Vegas history, please check out:

Hint: For faster navigation, when you click on your first picture link, don't close that 2nd window, but resize this window and position it so you can see both windows concurrently. I've designed it so that you can leave that 2nd (photo) window open, and you can click to your heart's content in this first window, and the images will only show up in that 2nd other window. This should also speed up your visit here. If you want separate windows, then right click of the photo links and select the "open in new window" option.

Some shots of the Paris hotel/casino. This is where I stayed with some friends.

Some shots of the Aladdin's interior:

More outside shots on the strip.

Ever been to the M&M store?

Monte Carlo and the tram trip to the Bellagio.

Finally arrive at the Bellagio.

On the way to Caesar's Palace.

Now down the strip and towards the Mirage.

A tiger on display.

On the way back to Caesar's Palace.

Las Vegas at night (some shots are blurry because it was night and I was moving/walking as I took the shots).

Shots of Las Vegas from my hotel room 30 floors up.

Well, that's all the photos I saw fit to include in my Las Vegas 2001 photo album. Hope you enjoyed looking through them. And if you've never been to Las Vegas, maybe these pix will spur you on to make the trip.
So how many have visited this subsonic webpage since 7-15-2001?
Back to the Patcave